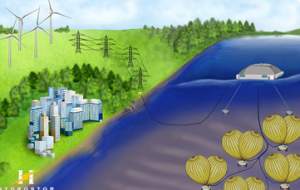 Hydrostor, a Canadian company based in Toronto, wants to make CAES (compressed air energy storage) become a solution for every city in the world that has a deep water body around. The same technique had been used before in the energy storage industry by pumping compressed air inside Earth’s crust, but the high number of drawbacks kept it from blooming.

However, Hydrostor‘s CAES system seems to be able to cope with the (main) issue of processing the extra heat generated during compression and putting it back at the time of decompression. They plan to install a system with a storage capacity of 4MWh and 1MW generation capacity in Lake Ontario by the end of 2012, at about 7 kilometers offshore.

The system will replicate the pilot version they built last year. Hydrostor‘s energy storage system practically consists of air-inflated balloons that are descended at high depths below the lake’s surface by using a certain amount of energy and then locked. Then, when that energy is needed by the grid, the locks keeping the balloons are released to go to the surface, thus pulling a system of ropes and pulleys that move an alternator like the one in your car, which generates electricity.

Hydrostor says the efficiency of their CAES reaches 70 percent and the costs added to the KWh billed to the consumer are minimum.